WHY AFRICA? My Heart Said “YES!”

Posted by Michael Skye on May 10, 2014 in Michael's Journal, Visionary Mind 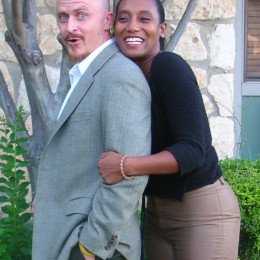 This post is Part One of my first person account of my first trip to Africa in 2006 with Robyn Emerson (that’s her and me goofing to the left):

I look out the window. Nothing but clouds below…

The smart and responsible thing to do would be to say, “No.”

Mother Culture was screaming it in fact. “No! Michael, are you crazy? You’ve been working so hard for so long, and you are starting to make some really good money! Don’t sabotage your success!”

Mother Culture was always right. Who was I to question her?

Of course if I had listened to Mother Culture, I wouldn’t be on this plane flying over the Atlantic Ocean right now on my way to Africa. I would be back in Austin, capitalizing on the success of my last event.

My “VisionForce Boot Camp,” a $2,500+ per person training for leaders, visionaries and entrepreneurs had just generated my business the most money to date, thanks to the new $2,500 to $10,000 per person up-sells on the backend.

Here I am with some of my VisionForce Boot Camp participants in May, 2006:

Several people had advised me that this was not the time to leave the business and the team I’d been working so hard to build and head off to some place in Africa for a month, volunteering my time and my work at my own expense.

And they had a point. After five years of creating and leading programs and events, and ten years before that researching and developing my ideas and work, everything seemed to be taking off financially. In addition to my live events, I had just finished my first physical product, the Visionary Mind Program, an online membership site to accompany it, and Visionary Mind Shifts, a free online course.

I was excited about how things were developing, and very proud that people were calling my boot camps and other programs “the most powerful experience of my life” time and time again.

But I was restless.

I was not content to facilitate events that just transform the people’s lives of people who could pay good money for them, and help them become more “successful” within the system.

I’d always envisioned myself working with young, spirited revolutionaries who were up to questioning everything and courageously “being the change” in the world.

My vision of the VisionForce Academy had always been that of a physical academy, where young people could come for a number of years, and where deep and lasting alliances would be built and profound and lasting growth would occur.

The only reason I’d been packaging and selling my work primarily to middle class white American adults was because I didn’t think the young revolutionaries that I really wanted to work with could afford it. And without money, how was I going to build a powerful organization that could affect the scale of change I desired?

I turn and looked over at Robyn. She’s looking out the window of the airplane in a rare moment of peace. There are six of us all together. Robyn, her two daughters, two other teenage girls and me.

She’s been stressed the last several weeks, just barely managing to get all the money together, the flights purchased and everything organized for this trip. We pulled it all together, and now here we are at 30,000 feet.

A friend of mine, who believed herself to be a psychic intuitive, had told me that she had a really bad feeling and had a strong intuition that this trip was too dangerous.

I sensed there might be some danger in going, especially since my preconceptions about Africa had been mostly influenced by what I’d heard in the news and seen on television: AIDS, violence, famine, extreme poverty, misery, etc.

When I confronted Robin with these concerns she just laughed. We’d be taking four American teenage girls to Africa for 3-4 weeks, why did she seem so unconcerned?

And why was I trusting her? The past several months she’s been late, disorganized, overwhelmed and out of money. Is this a grand mistake?

But, she’s why I’m here on this plane. Even though she’s a single mother with two teenage girls, no degree, and no money; she’s working with young people in inspiring and unconventional ways–taking American teens across the world and into other cultures to connect with other young people their age and expand their worldviews. She inspires me.

No money, no “successful” organization, no degree, no one giving her official “permission.” She’s doing it anyway.

And this is my chance to just do it anyway—-to make a greater impact in my world, beyond transforming the lives of those who could afford to travel to my workshops and pay for lodging and the event. Africa!

One of her two teenage daughters looks over at me and lifts an eyebrow with attitude, as if to say, “Yeah, what?” I smile and return the look as best I can. This is going to be quite an adventure.

In many ways I still feel like a teenager myself. I can’t imagine having teenage children, although I’m old enough. I turn and look back out the window.

What would the African teenagers be like? How receptive would they be to me and what I had to offer them?

I didn’t know it then, but this trip to Africa would CHANGE MY LIFE FOREVER!  Let me know in the comments if YOU would ever go to Africa.

And consider  joining me as I RETURN to AFRICA THIS SUMMER for the transformational adventure of a lifetime! 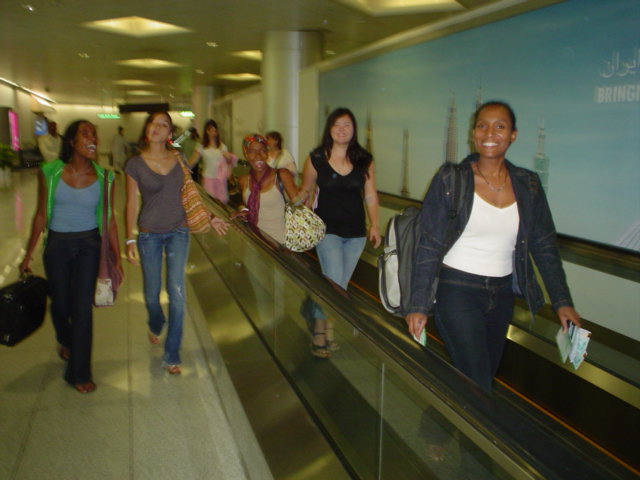 Robyn and the girls in the Dubai aiport