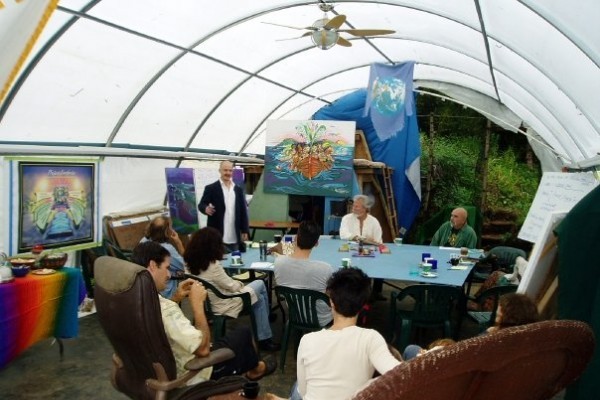 Keith Kavisic and visionary elder and social architect, Jim Channon, were our hosts for this Summit.

At the time I was working on a book called, I Stand, which was to be a kind of manual for the compassionate revolutionary. Jim’s classic underground viral book, The First Earth Battalion Field Manual, from the late 70’s was an inspiration. In his book he postulated the rise of the “Warrior Monk”, a kind of soldier who would use progressive and enlightened means to achieve peace, and envisioned a new unit of such soldiers, The First Earth Battalion, who would be repurposed as protectors and restorers of our biosphere.

You may know of Jim from the Hollywood comedy which came out the following year, Men Who Stare At Goats, which makes fun of attempts by the U.S. military to employ psychic powers as a weapon. The movie character Bill Django, played by Jeff Bridges, is based on Jim Channon. While the film may be great for laughs (I thought it was mediocre in this regard, but the trailer’s quite funny), the reality is far more fascinating.

Jim, with his assignments in the military to study the leading edges of the human potential movement, was inventing a “protomythology,” a first myth intended to birth a new idea about who we can be and how we can better use our military for positive ends. All of this was fascinating for me, because this is exactly what “VisionForce” was in my mind! I wanted the idea of VisionForce to exist: that there were individuals on the planet actively working to resolve crises through underground creative endeavors, through global crisis response teams, etc.

On our first day with Jim we got to exhibit our work for him and his team at his visionary homestead and tropical-headquarters atop a mountain which overlooked the ocean and Maui. The setting for presenting our work was inside a “BioPort” resembling a military outpost on a tropical island, around a table of visionaries with unique skill sets in bringing forth a more beautiful world. It couldn’t have been more perfect. We were there to incubate our concept of VisionForce and it’s role for humanity on land which had been designed by a visionary elder as a living model of how we can live in permaculture paradise with new views of living together in family and community.

The second day Jim gifted us his expertise as a “corporate shaman,” his invented post-military career, where he honed skills such as visually mapping the visions and tactics for Fortune 500 companies.

The two days with Jim were far and away the highlight of the summit for me. The rest of the days included time doing yoga, Xi Qong, relaxing on the beach, co-visioning our shared futures, and lots more goodness. We owe a huge thanks to Keith and Jim for their gifts!